As we mentioned in the first blog, we had to engage the services of our web developer to help us post the blog.  However, although my WordPress skills are still decrepit, this time around, I decided that, by hook or by crook, I was going to write and post this blog and the subsequent ones myself and see how things turn out. So if you find things aren’t up to scratch, you know who to ‘attack.’

Anyway, you’ve probably seen snippets of information about the Sankofa Forest launch party on social media. These were posted by a few of our valued Sankofa Family Members (SFMs) who attended the launch, and who’s going to blame them for doing so? They were so excited they just couldn’t wait to share what happened at the party with their friends and family. We’ve whetted your appetite long enough and we believe you’re dying to hear more.

Contrary to what I initially anticipated, the launch party – the first by your Dr. Kwasi’ O. business – ended up taking place at home. Neither Sonje nor myself had ever been actively involved in a launch party and, if you know us very well, you wouldn’t be surprised to hear that some crazy things happened by way of preparations.

As usual, we waited until the last minute and began cramming everything into the two days prior to the party. And you want to guess who the culprit is? Sorry wifey, this is the price you pay for marrying a Ghanaian – they’re pretty good at working overly leisurely to the point of annoyingly slowing you down.

In the beginning, we decided we were going to rent a place for the party; some of them even came for free. Unbeknownst to me, however, wifey had a hidden agenda. A couple of days after agreeing to rent a place, she started coming up with a bunch of reasons for us to organize the party at home. I didn’t find them very convincing but, hey, I thought there was no point arguing.

My suspicion became validated when, as I was relaxing on the couch, she came massaging my baldhead and in the process suggested if I could fix the dents on the interior walls and the fence wall and repaint them. I nearly fainted when she said that because I knew it was going to be awfully difficult to do that amount of work in just a day-and-a-half.

Later, it became evident to me that, having lived in the house for more than six years, Sonje wanted to take advantage of the launch and get it done up.  I must admit that the house needed some caring. Good job, my dear, for coming up with your trick.

We were privileged to have spent the launch day with about forty SFMs. This included a Fremantle councilor, naturopath, pharmacist, sea-farer, business administrator, teacher’s principal, an environmental scientist as well as stay-at-home moms and dads, IT consultants, sales and marketing executives, builders and trade-persons, financial controllers, accountants, retirees, and kids – including teenagers.

How fantastic it was to see people from different walks of life registering an interest, and/or seeking to put their faith, in Sankofa Forest Natural Deodorant Spray! I’d say Sankofa Forest was overwhelmed with love that day. 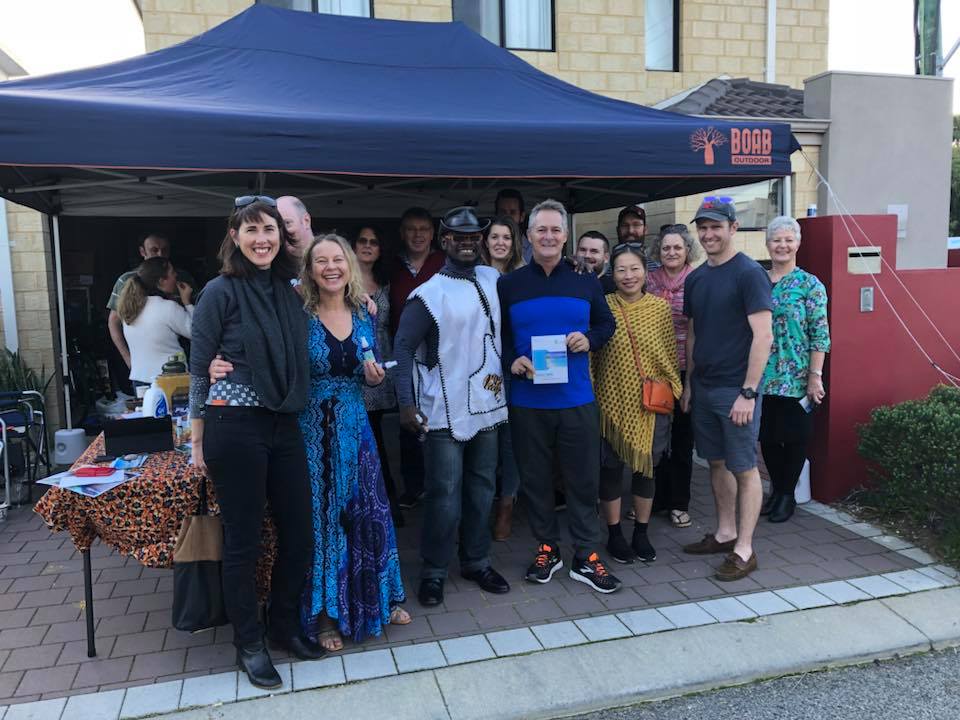 Some of our fantastic Sankofa Family Members (SFMs), including Hannah (extreme left), our Fremantle Councilor. 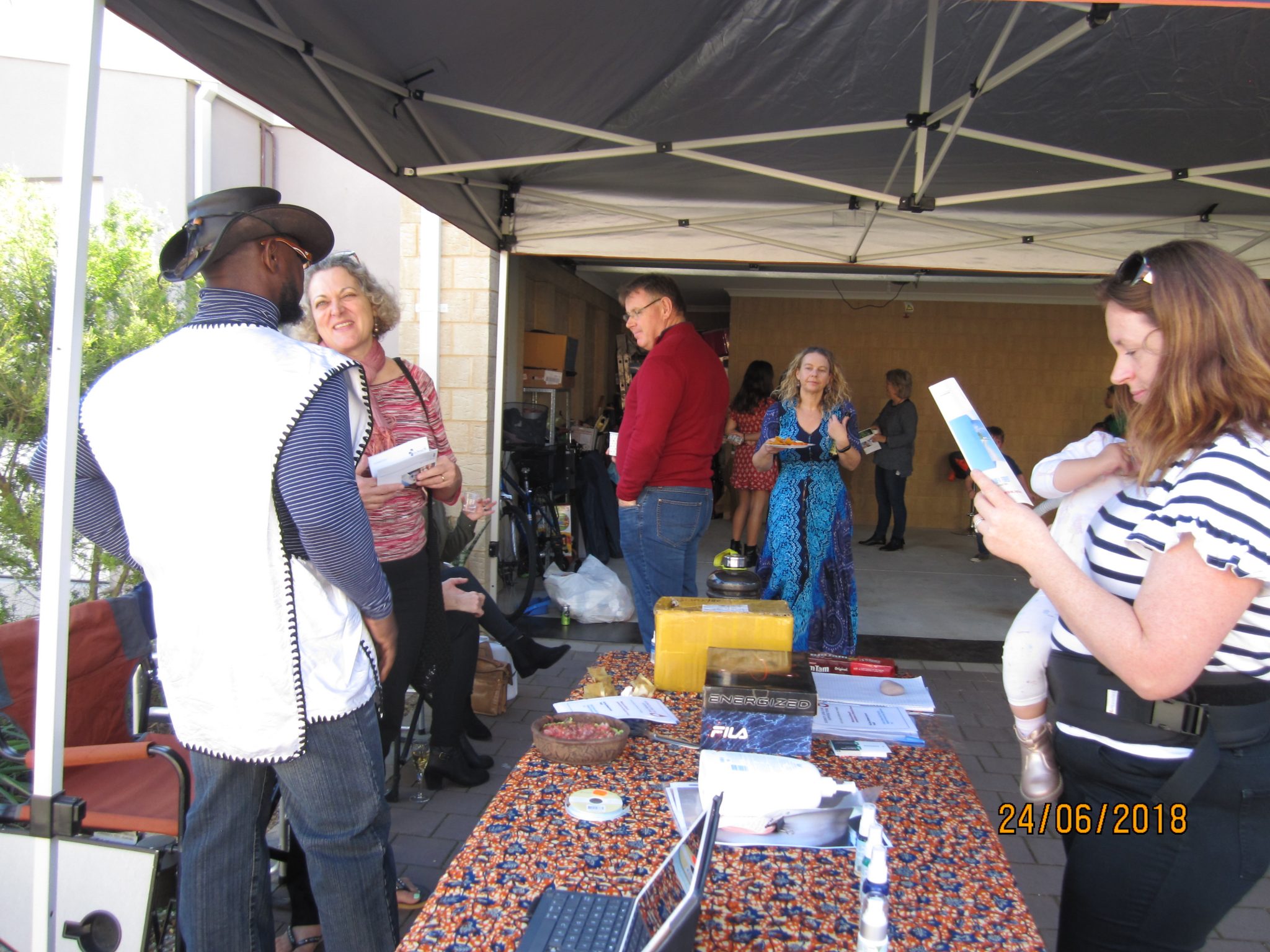 An SFM seriously engaging with her Sankofa brochure. 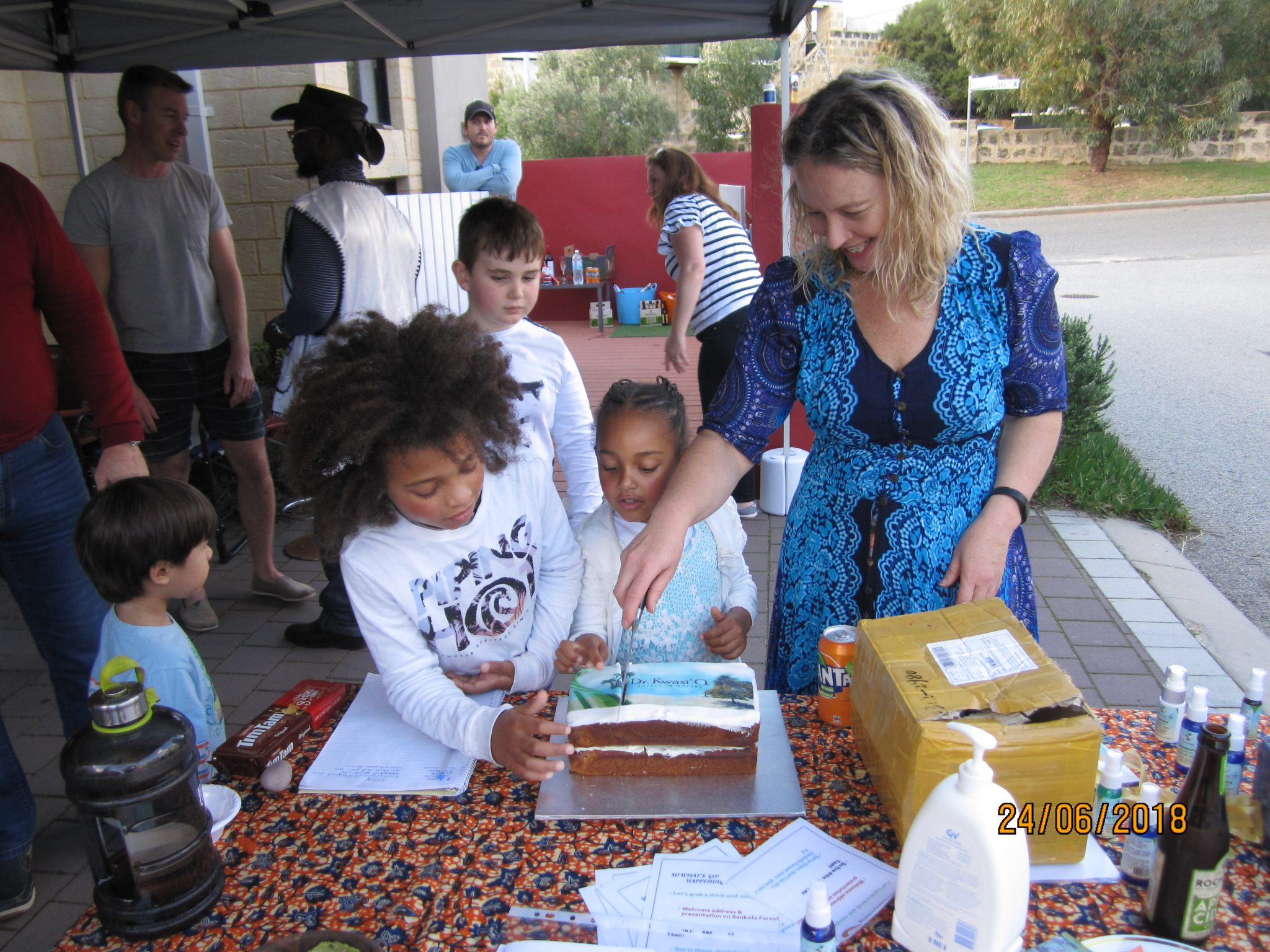 Sonje doing what she does best: regaling people with her yummies. 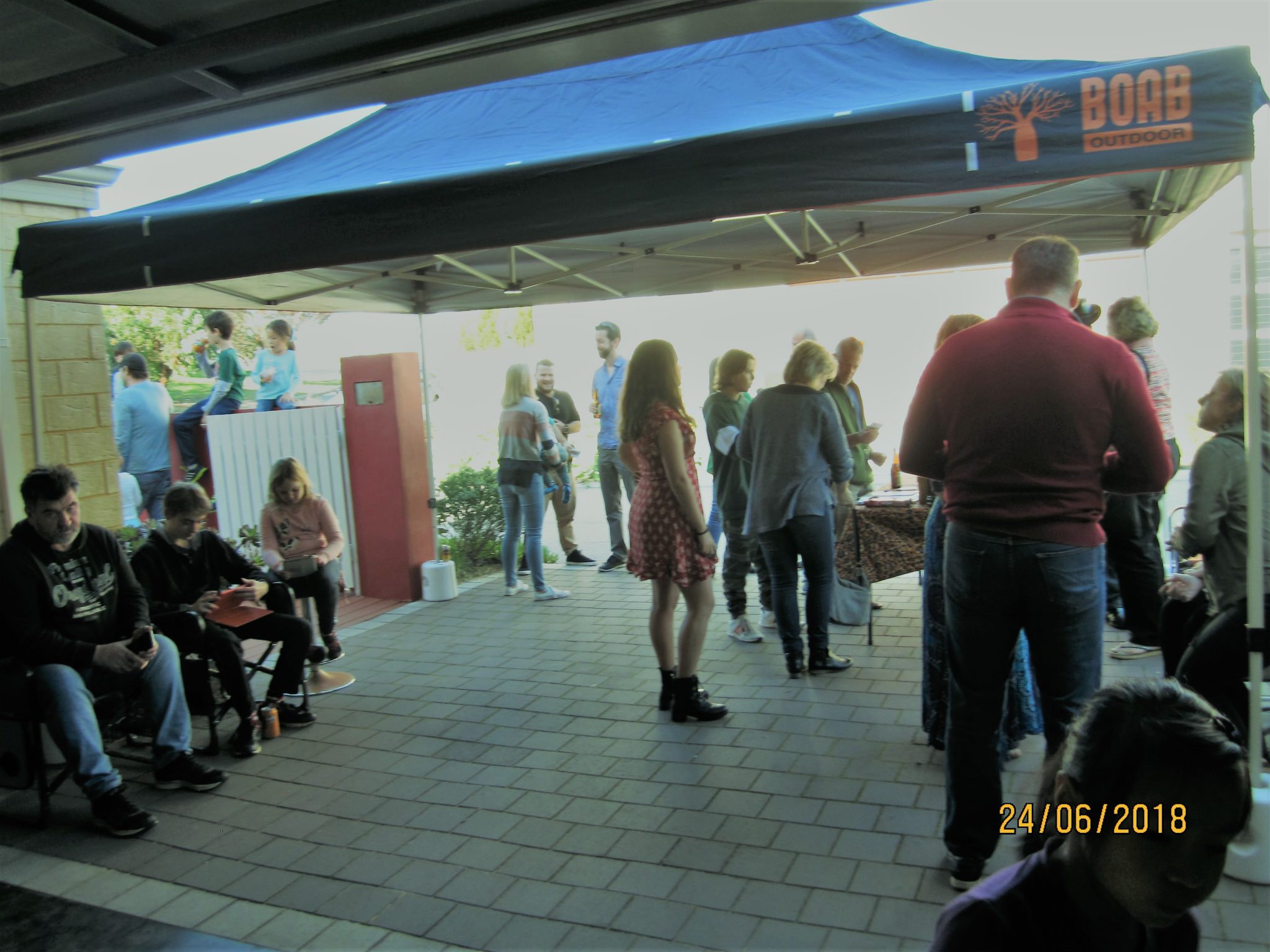 Some kids having a great time surfing drkwasi.com.au; others partying on the fence wall.

And, as she always does, wifey graced the occasion with magnificently prepared, healthy-living meals. If you know the depth of Sonje’s culinary skills and have had the opportunity to taste her food, you’d realize that it can be difficult stopping yourself from coming back for more. One SFM acknowledged he wasn’t going to come to the launch as he had a prior commitment, but then he realized Sonje was cooking so he rearranged his appointment. Yes, that’s how addictive her food can be!

Let me tease your buds with the three images below. 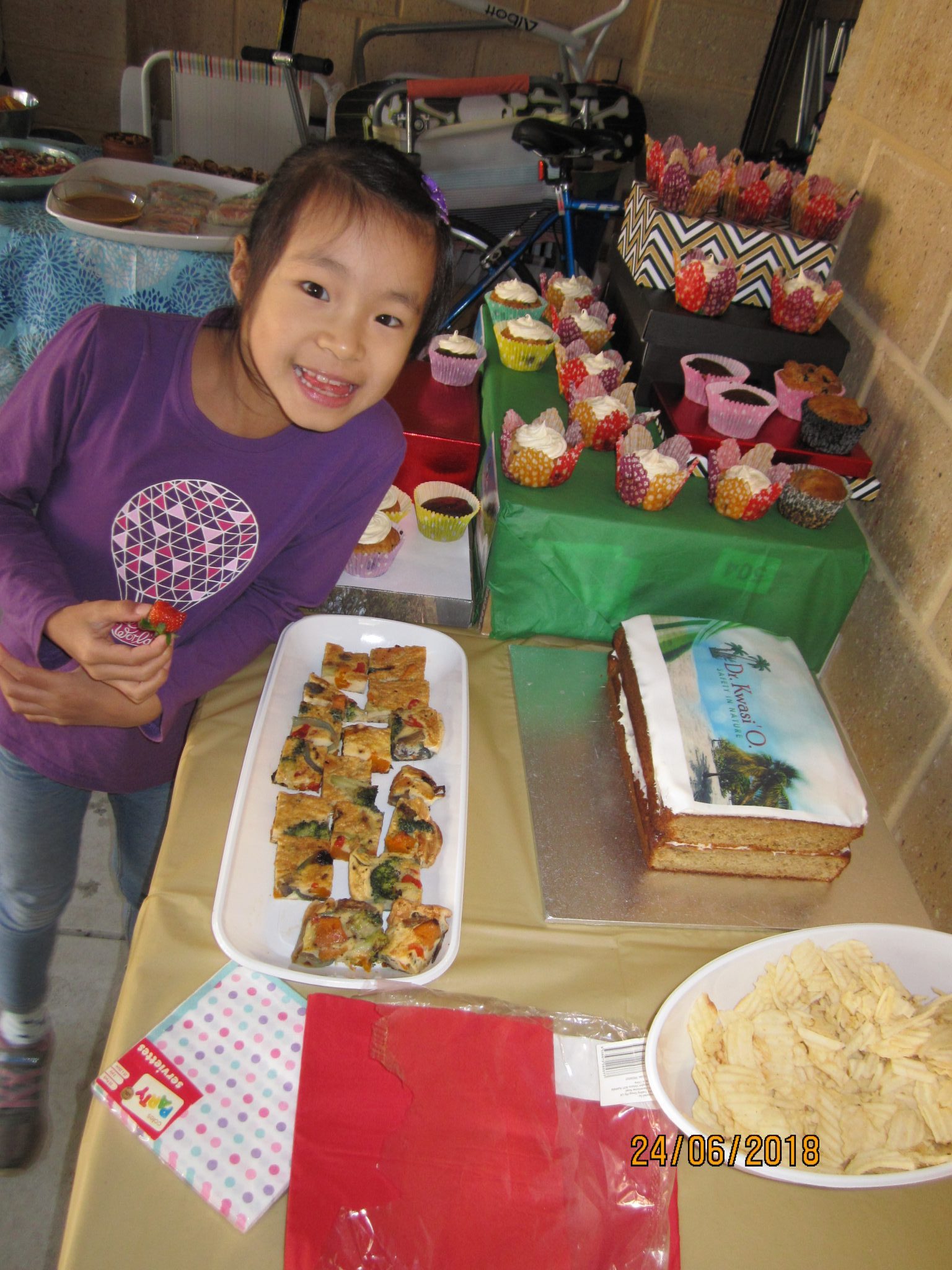 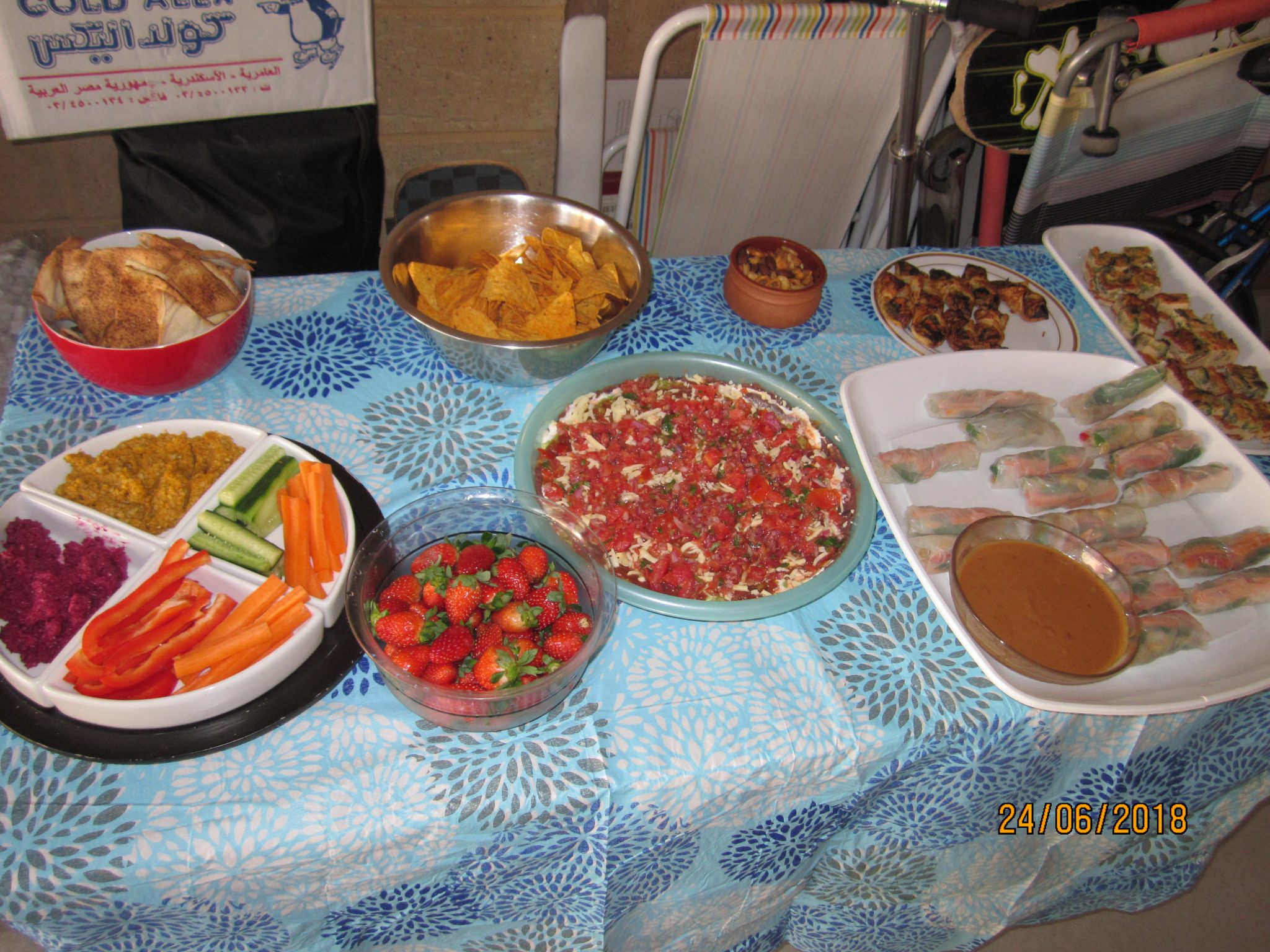 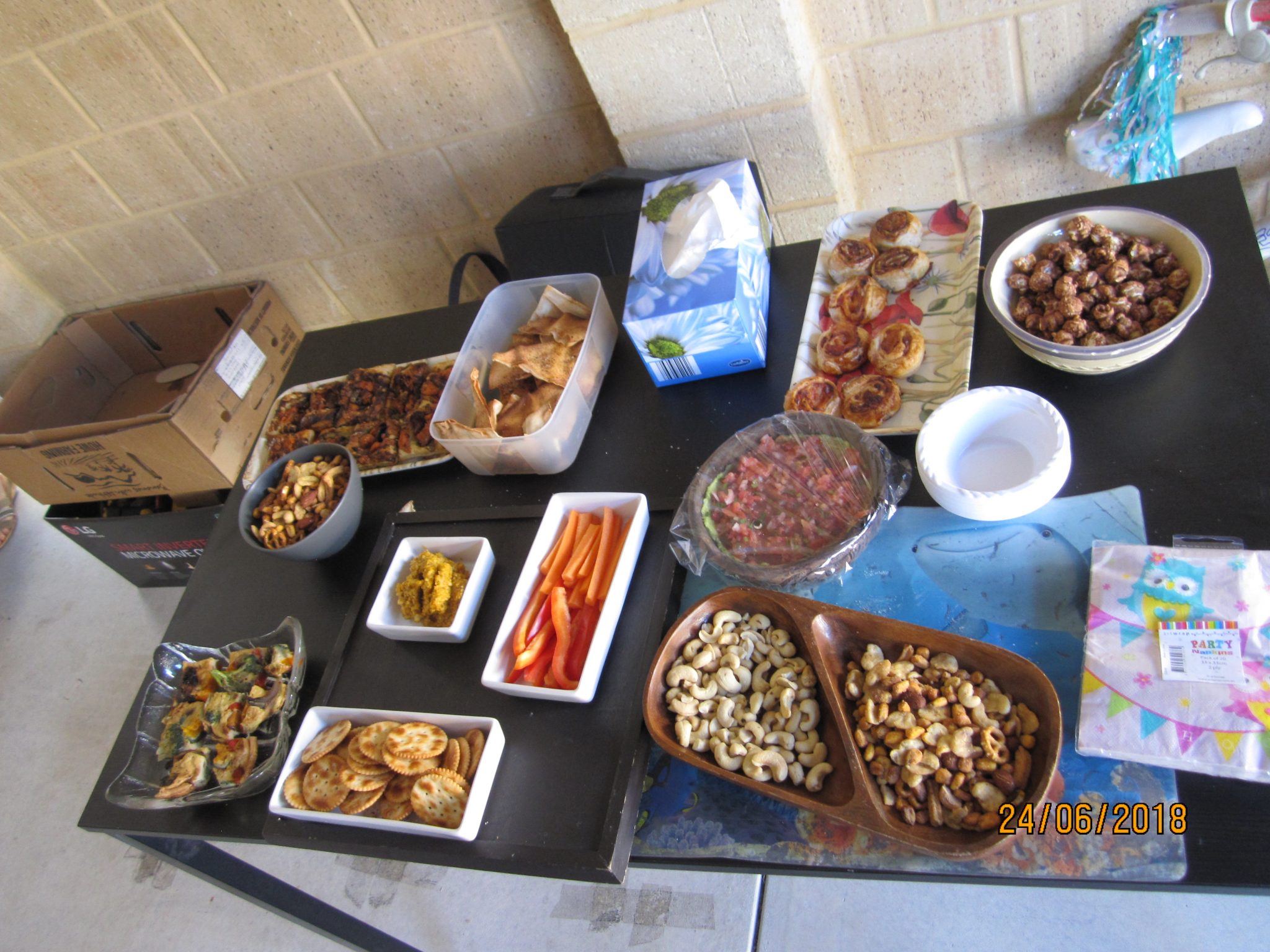 We took a little break from Sonje’s sumptuous cuisine to learn more about Sankofa Forest, making sure we were regaling our SFMs with Bob Marley and reggae tunes along with Ghanaian highlife music.

We want you to jump onto the Dr. Kwasi’O. website and the Facebook page to familiarize yourself with details of the information we discussed that day.

This information includes the story behind Sankofa Forest, the multiple uses, the ingredients, product reviews, the twenty or more reasons why Sankofa is your ultimate body deodorant, the dangerous chemicals you avoid by choosing Sankofa, the effect of these dangerous chemicals on your body, and the rationale for setting up your Dr. Kwasi’ O. business.

Here we present an overview of some of the things we discussed.

Sankofa Forest is a kid-friendly, handcrafted, gender-neutral, natural, body deodorant spray made in Fremantle with inspiration drawn from our experiences in Ghana. It’s suitable for most skin types and all skin colors and packaged in 20ml, 30ml, 40ml, and 50ml bottles for your convenience.

The word Sankofa, in our Akan Twi dialect, means ‘go back and take it.’ For purposes of this business, the term, Sankofa, reflects the idea of going back to the days when, as kids, we were obliged to use boodobaa, a natural, fibrous material we’d prepare by pounding charcoal and plantain peduncle (stalk) together with stones, for our personal hygiene. Sankofa’s traditionally symbolized by a mythical bird reaching to retrieve an egg from its back, as you can see in the Dr. Kwasi’ O. logo.

Now tell us… Prior to reading our blogs, did you ever know about the word ‘Sankofa?’  And if you did, how did you come to know about it?

We don’t mean to bore here you with information about Sankofa Forest Natural Deodorant Spray. However, we know there are so many people out there, who for various health reasons, are looking for a decent natural deodorant to use. Knowing Sankofa can be of immense help to them, we believe it’s our duty to share with them a little bit of information about it here.

The first unique Sankofa Forest feature is its supreme effectiveness. It’s the most effective natural spray deodorant you’ll find on the market, both in Australia and across the globe. No kidding! Sankofa’s effectiveness even puts many mainstream antiperspirants to shame.

We, therefore, weren’t boasting or trying to mislead you when we gave Sankofa Forest the slogan,  ‘SIMPLY THE BEST…FORGET THE REST.’ We encourage you to check out the website for what other SFMs have already said about Sankofa.

The second unique feature of Sankofa is its multiple functions. It can effectively deodorize any part of the body where sweat and foul smells erupt, including the underarms, feet, hands, groin area, belly buttons, and between skin folds.

If you finish eating in a pub, hotel, or restaurant, for example, and you don’t want to use those cheap, nasty, mainstream liquid soaps they’ve got in their bathrooms, just wash your hands under (warm) water and spray your Sankofa Forest on them. It’ll remove most lingering smells.

Our seven-year-old says his school pants smell like strawberry when he accidentally ‘wees’ in them and sprays them with Sankofa.  There you go! This is something we’d never have known. There’re other uses we’d probably never know. If you discover any other uses on your Sankofa journey, can you share them with us?

Another characteristic feature is that, unlike many mainstream and natural deodorants, Sankofa doesn’t mask foul smells;  it dissipates them. For this reason, Sankofa works for both clean and unclean underarms, i.e. it doesn’t matter whether you’ve taken a shower or not, Sankofa will effectively remove your underarm smell. 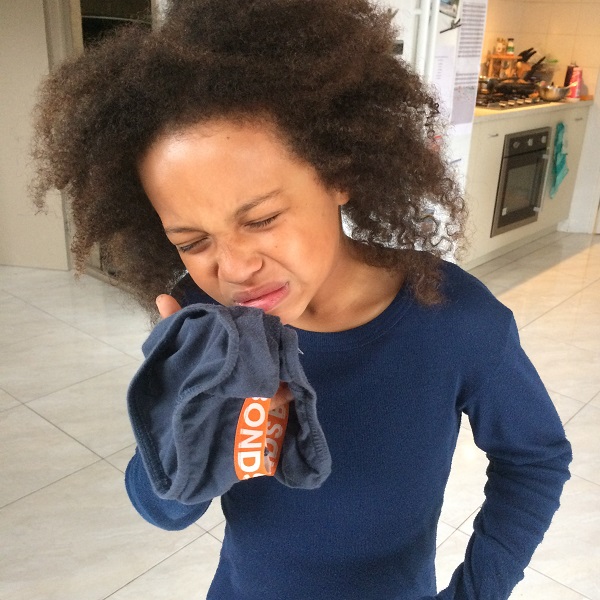 Before spraying Sankofa on his ‘wee’ pants. 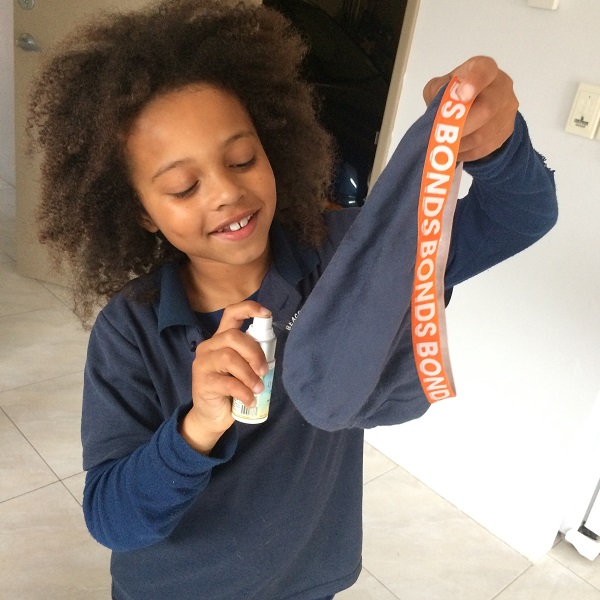 After spraying Sankofa on his ‘wee’ pants.

If you were wondering, one daily application of 2 to 3 sprays in each underarm will cover you for normal activities. And if you choose to top up before, after, or during vigorous activities, expect to be covered for about 30 hours.

Because you may not require much Sankofa to ward off your body smell, the bottles last longer. For example, for underarms use only, a 20ml bottle can last up to 40 days; about 100 days for a 50ml bottle.

Now, if you’ve ever used, or are still using, a natural deodorant PASTE, we’d like to hear from you. What has been your experience?

Unfortunately, we don’t have a pleasant experience to tell about deodorant pastes. We found it a hassle to apply deodorant pastes in hairy underarms, not even to mention the need to wash the hands after each application, especially if reapplying into a stinky, sweaty underarm. We also noted deodorant pastes generally leave stains and residues on our clothes. Not only that: we found it very uncomfortable (re)applying in public given we didn’t want to be seen as playing with our underarms.

Luckily, you’re spared these unpleasant experiences when you’re using Sankofa Forest as it only comes in a spray.

Our SFMs who attended the launch had the opportunity to hear the story behind Sankofa. We’re not going to narrate it here. Rather we prefer to save it for your enjoyment whilst you’re on the website. 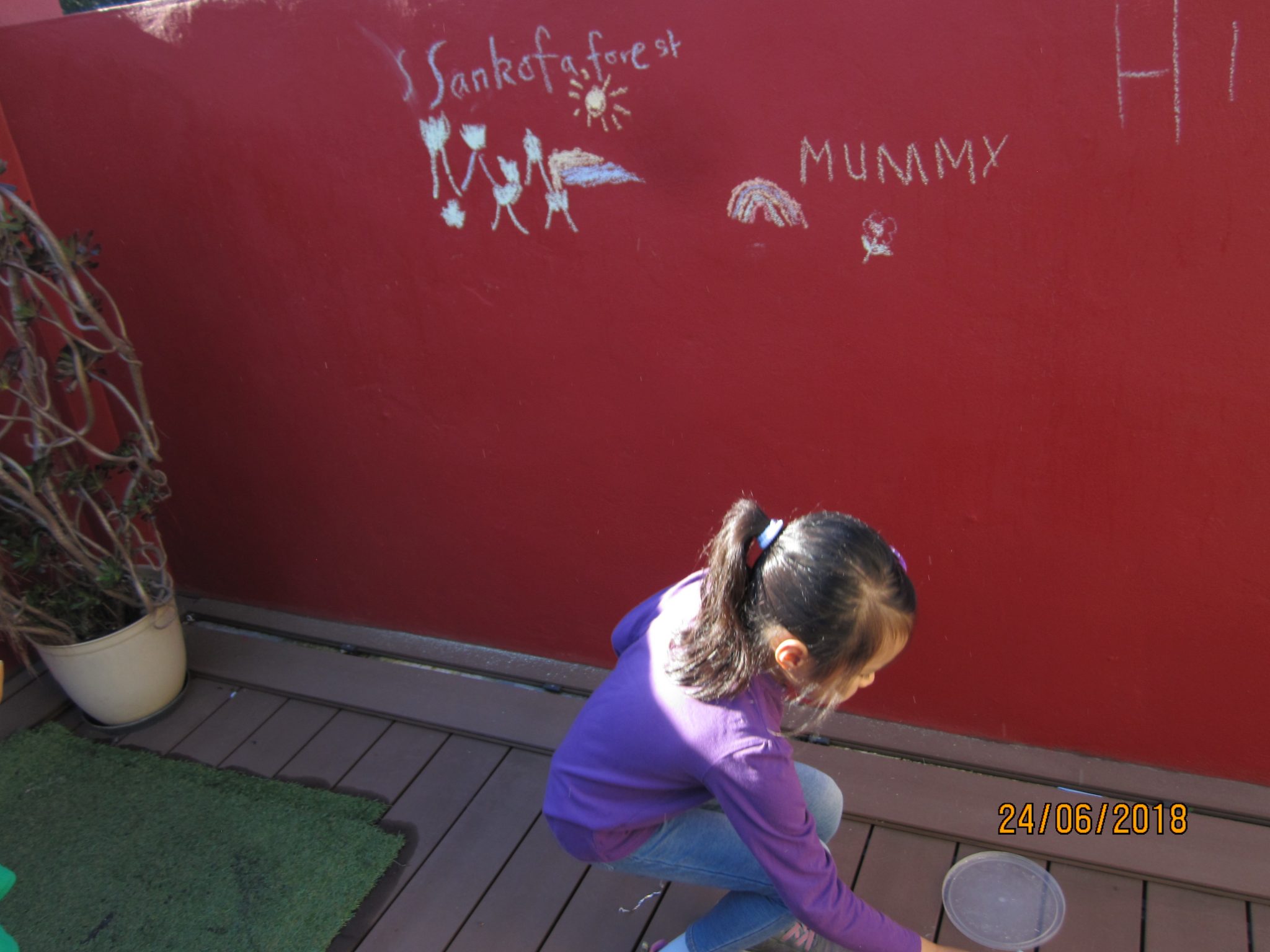 Some kids loved the name Sankofa Forest so much they couldn’t help themselves creating a design for it on my newly repainted wall. 🙂

During the final stages of the party, we adult SFMs went around testing Sankofa samples. Whilst doing so, we observed some of the kids having fun doing other own things, including writing ‘Sankofa Forest’ on the very fence wall Sonje had managed to trick me to repaint the night before. Ouch!

I tell you what: it was all fun – way more fun than some of us expected!

A huge thanks to all our SFMs – both kids and adults – for making this day special.

It was a great success. 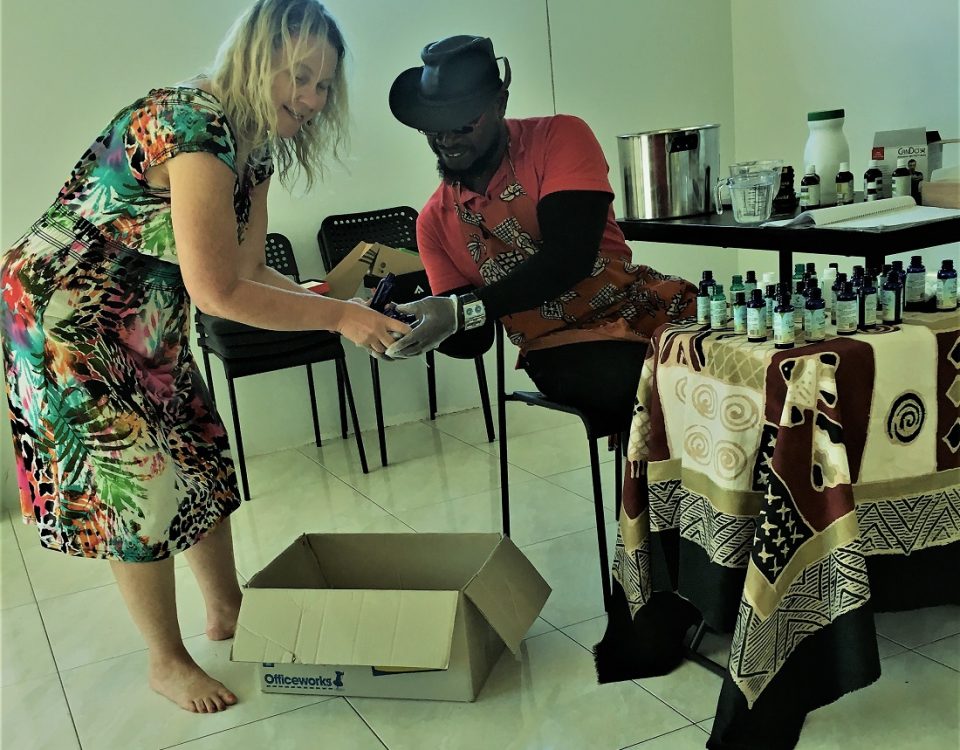 All geared up....Preparing your Sankofa Forest.